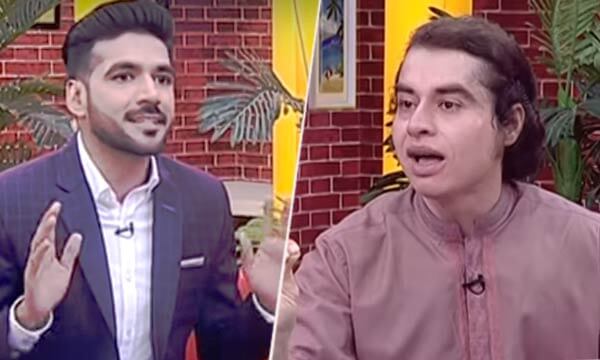 Recently, the social media sensation, Nasir Khanjan was invited to Samaa TV’s Morning show ‘Naya Din’. The show’s anchor made had seemingly made Nasir Khan uncomfortable by badgering him with demeaning questions and statements.

It is no secret that Nasir Khanjan remains controversial for videos which are often deemed ‘against the cultural norms of the society’. Nasir was consequently invited to Naya Din for an interview and the host, Muhammad Shuaeb questioned Khanjan for a contentious video that went viral on the internet.

Calling it ‘vulgar’, the anchor had seemingly adopted a bullying tone to school Nasir for posting it on social media.

The twitterverse was of-course furious with the approach of the anchors of the show calling them out for their rude behaviour and demanding an apology from them towards Nasir Khanjan. Many prominent personalities also took to Twitter in order to share their point of view.

Here’s a gist of what is being said on Twitter

Why is this Samaa host bullying this person? They invite a guest to their show to insult them? If he thinks Nasir Khan Jan's posts are not entertainment, what makes him believe his dumb show is entertaining enough. Such anchors also bullied Taher Shah… https://t.co/0oejxyajDn

This is pretty shameful – I know morning shows are not doing well on most channels, but this one on Samaa takes the cake – invites a guest only to insult him – copying this from Arnab Goswami I presume who has perfected it to an art – credit to Nasir Khan Jan who kept his cool pic.twitter.com/p90ecYwcor

Who decides what is wrong and what is vulgar? Certainly not ill-mannered news anchors with an urgency to prove themselves right. This is no different than Aamir Liauqat calling Taher Shah on his show and embarrassing the life out of him. Is hammam mae sab nangay hain https://t.co/7FUTc9rIUD

This Samaa morning show anchor is the most unethical rude and disrespectful guy I’ve seen on tv please tag him and he should immediately apologise to Nasir khan Jan 🖐 pic.twitter.com/r1VXlR2z1Q

Seriously! On the first ramazan Twitter trends in Pakistan include #Nasir_Khan_Jan.@SAMAATV this kinda content is just a shit,Which we already have been served by stupid anchors like #lodhi and #liaqat many times… so,Please grow up….@nadeemmalik You should protest against

First time ever i liked Nasir Khan Jan for keeping his cool and tried to control the situation with argument. Right or Wrong i’m no one to judge. What stupid hosting was that ? Insane. These folks can stoop down to the core of besharmi just to get ratings. Disgusting !

This is not the first time stars and personalities have become a target on national television by hosts of a show. In 2016, Aamir Liaquat came under fire after he had humiliated the ‘Eye to Eye’ singer, Taher Shah on his Ramadan show. A year later, Aamir also faced backlash for inviting Meera and mocking her live on television.

What do our readers think about the story? Do share your thoughts in the comments section below