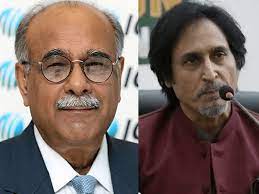 The Ministry of Inter-Provincial Coordination said in a statement that they have sent the summary to the PM which includes the name of Najam Sethi and Shakil Sheikh.

However, it has been reported that the summary will need to be approved by the federal cabinet, which usually meets every Tuesday.

It was reported last week that the coalition government intends to make changes to the PCB’s Governing Board, including the replacement of Ramiz Raja.

It is worth noting that news of the replacement has been in the media since Shehbaz Sharif dethroned Imran Khan in a vote of no confidence in April this year.

Last week, the government also decided to reinstate the Pakistan Cricket Board’s constitution from 2014 in order to reintroduce departmental cricket in the country.