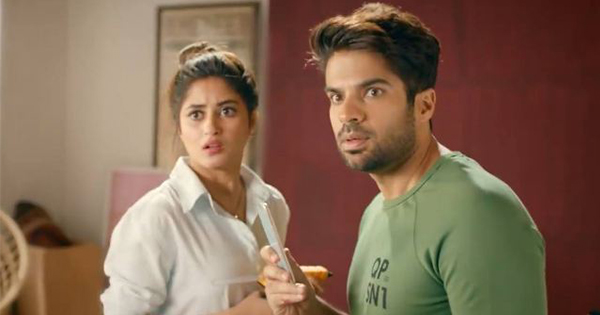 Nobody is stranger to Kisan cooking oil as it is used widely in Pakistan in many households. The oil is a staple for many dishes whether they be Pakistani or continental. The recent television commercial released of Kisan cooking oil caught our attention in the best of ways.

It shows a mother calling her son to inform him that they are on the way to have dinner with him in his new house with his new wife. You can see Adnan Malik nervous and trying to tell his mother that his wife, played by Sajal Aly, has not cooked anything yet. But the mother disregards it and tells him to open the door. Then we see Sajal Aly and Adnan Malik look scared as to what will happen once they arrive because as Sajal says, it is their first visit to their new home and the common tradition is for the daughter-in-law to cook something for her in laws.

Once the parents arrive, Sajal is wary of the situation and the mother-in-law looks to be getting ready to get upset but then she smiles and says that it is not necessary for the daughter-in-law to cook every time and that the mother-in-law can also feed the family. They bring out a bag of food that she had already cooked and brought for her son and his wife.

Then the family is shown having a nice family lunch together, made with Kisan cooking oil. The beautiful message shown in the commercial is one that is important to break stereotypes about how daughter-in-laws are supposed to behave or how mother-in-laws are supposed to react. A relationship between a girl and her in laws should be of love, compassion and understanding not one of judgement or criticism. We applaud the brand for showing such great family dynamics in their commercial which not many other brands do properly.

People are discussing it on Social Media ; DO you want to see how ? Just look at some comments below: 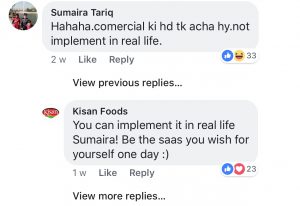 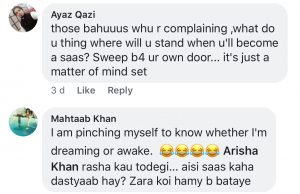 Urwa Hocane Compares Her Shaadi to the Royal Wedding, Gets Mocked by People