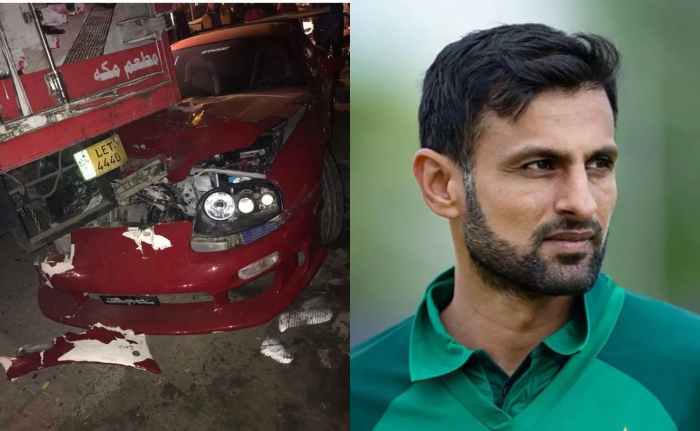 Former Pakistan skipper Shoaib Malik’s sports car rammed into a truck in Lahore. However, the ex-skipper survived without any injury and reacted to the incident on the social media platform Twitter.

According to the images, the car took the most damage on the front as it hit a truck. This happened at the restaurant near NHPC. According to a local newspaper reporter who got in touch with eyewitnesses, the cricketer was reported exiting NHPC at a fast speed that he was unable to regulate. The car skidded on the road and then hit the truck.

He and Wahab Riaz had left together; they were reportedly in great spirits but clearly were inexperienced when it came to driving a sports car.

People were worried about their favorite cricketer. And so Malik informed his fans through a tweet that he was completely fine:

“It was just a happenstance accident, and Almighty has been extremely Benevolent,” Shoaib Malik wrote on Twitter a couple of hours after the crash that had fans worrying for the cricket star. Thank you to each one of you who’ve reached out. I am deeply grateful for all the love and care.”

– "I am perfectly all right everybody. It was just a happenstance accident and Almighty has been extremely Benevolent. Thank you to each one of you who've reached out. I am deeply grateful for all the love and care…" ~ Shoaib Malik

It was also said that Malik requested a bystander not to make a video right after the incident when Malik was still in the car.