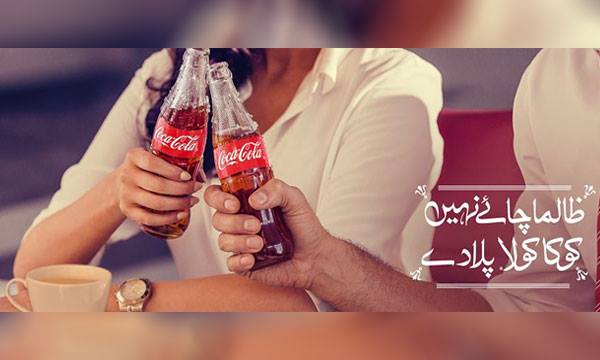 Over the last couple of weeks, social media networks have been observed to be in a state of buzz and frenzy, after Coca-Cola Pakistan launched its new Ad campaign.
The latest TVC which has been titled as ‘Zaalima Chai Nahi Coca-Cola Pila De’ features Sikander Rizvi of ‘Dekh Magar Pyaar Se’, alongside the beautiful Aisha Linnea Akhtar.
For the first time in Pakistan, a fizzy drink has been shown to be a preferred alternate drink and that too over tea (the most loved drink of the nation)!
The TVC shows a very dapper, Sikander who is quenching his thirst with a chilled bottle of Coca-Cola, while the stunner, Aisha is shown as being tempted by the cool cola drink. A seductive eye connection does the trick between the immensely good-looking pair as Aisha  pushes her “cup of chai” on the side and walks over to Sikander and opts for Coca-Cola instead to beat the heat!
The TVC is perfectly executed, with a jingle that is extremely catchy. Throw that together with the gorgeous faces of Pakistan’s Film and TV industry like Aisha Linnea Akhtar and Skikander Rizvi, your TV set may as well catch fire from all the heat!
Tea Giant, Tapal, on the other hand has hit back at the brand with a subtle change to their ongoing campaign which says, “Tum mein aur aik cup chai” with “Tum, mein aur aik cup zaalima chai!”
You can watch the latest TVC by Coca Cola right here:
https://www.facebook.com/1527753387475028/videos/1856310574619306/

"Be Your Own Hero" – Event by WoWoman Lahore

Sajal Ali And Adnan Siddiqui's Teaser for 'MOM' is Out