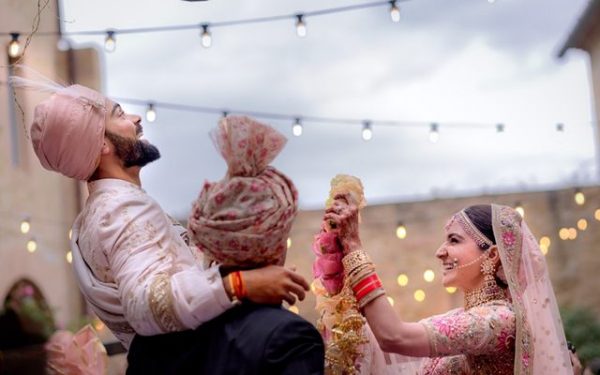 The Indian captain Virat Kohli recently tied the knot with the love of his life and Bollywood Diva Anushka Sharma at the picturesque venue in Tuscany, Italy. His fans and the well-wishers poured in the tweets on social media for the adorable couple after they shared the winsome images of their secret wedding with a lovely message on the same evening. The stand-in skipper Rohit Sharma also cheekily tweeted the congratulatory message for them. However, after Anushka, now Virat Kohli has also responded to his husband handbook tweet which is winning the internet currently.
The captain courageous was rested for the limited-overs leg of Sri Lanka’s tour to India after winning the three-match Test series. Amidst the busy schedule, he planned his marriage and entered the wedlock on December 11 in the presence of close friends and family. Interestingly, during the same period, the Men in Blue were playing the three-match ODI series against the team from the island nation. The stand-in Rohit slammed a sensational double hundred in Mohali in the second ODI which was also the record-breaking third of his career.

Virat Kohli and Rohit Sharma together have formed some of the sensational partnership on 22 yards winning the games single-handedly for their country. But the former has never managed to hit the double-century in the limited overs format despite having scored six of them in whites. On the other hand, Rohit has been magnificent in converting his hundred’s into double-centuries which has been lauded by the cricketing world.
So, the 29-year-old in response to Rohit Sharma’s congratulatory message, in which he had assured his captain of sharing husband handbook, Virat asked for a double hundred handbook as well. His reply to the Hitman read, “Haha thanks Rohit, and please do share the Double Hundred Handbook as well.” Recently, even Anushka had also loved the message from Rohit and had thanked him for the wishes.

Here’s the thread of the convo:

Haha thanks Rohit, and please do share the Double Hundred Handbook as well. 😀

Hahaha thanks Rohit! 🙏😊 And congratulations on your splendid innings 👏 https://t.co/xeo9whyx8T

4 Of The Best Restaurants That Serve Yummiest Nihari In Karachi.